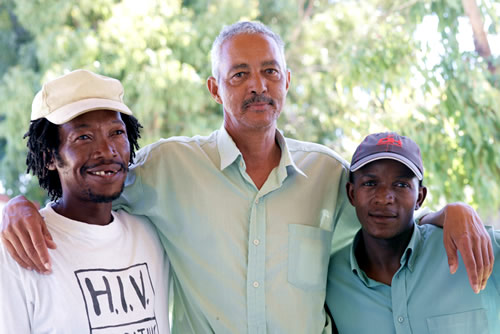 Kehle Makhabeni was the Etafeni Centre’s head gardener for more than eight years. Kehle came to us originally as a member of our Income Generation programme. He was HIV positive and sick. His two sisters had both died of AIDS-related illnesses and he and his mother, Clara, were taking care of their orphaned children. Kehle was a Rasta and he made the most beautiful hats out of coloured plastic bags, collectors’ items. He was also a creative beader. When we started our food garden at the centre, he asked if he could be employed as a gardener. He’d had many years’ of experience growing his own weed so we thought he might be good. He was. He went through the Abalimi Bezekhaya training, however, and produced, over the years, many hundreds of harvests of handsome organic vegetables for the children and HIV+ income generators at the centre. He was our head gardener and groundsman for ten years.

Kehle was winched back from death’s door many times. A few years ago he succumbed to what we thought was terminal TB. We applied for a disability grant for him, when, thanks to his wicked sense of humour, the efforts of his doctor and the advances in ARV treatment, he bounced back, grabbed his spade and carried on as if nothing had happened. Kehle was particularly proud of his lawns and our HR Manager had once to put him on compulsory leave because he wouldn’t let our afterschool care children play on the grass.

The children in his household are now grown and are out of school. After a very short illness, Kehle died. He was part of the fabric of the Nyanga centre as much as any bricks and mortar and he will be much missed.